The old 1084S monitor I’m using with my Amiga 500 still works pretty well, but I’d like to find some way to connect the Amiga RGB out to a modern VGA LCD or CRT display. As a first attempt, I bought a RGB-VGA adapter from Amigakit[a]. 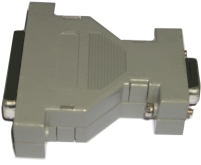 RGB to VGA adapter from Amigakit.com

I tested it both on a LCD display and on an old CRT monitor but neither of them worked with the 15 kHz output frequency of the A500 video out. As it’s written on the amikit adapter readme, on an A1200 you can start the workbench and then launch a program to switch the output frequency to 30 kHz. This could be enough to allow modern displays to sync with the Amiga signal. Obviously this technique is useless for games and, as I don’t have an A1200, is useless for me.

Searching on the web, I eventually discovered that the easiest way to connect an A500 to a modern display is using a RGB to SCART adapter connected to a LCD TV.

I decided therefore to build a SCART adapter by myself.

I found a very good place with a lot of stuff about building a SCART adapter (a cable schematic and some tests with different TVs) here at Ian Stedman’s website.

Here is Ian’s schematic for the SCART adapter: 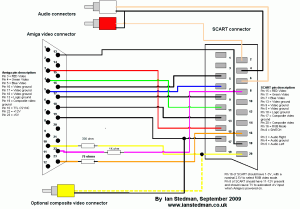 I used a standard SCART cable, an RCA cable with two connectors for the audio part, 3 resistors, and for the 23 pins female connector I decided to recycle the Amigakit RGB-VGA adapter. 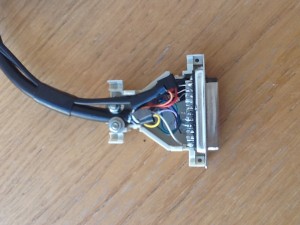 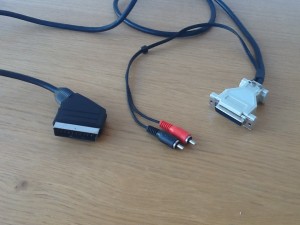 The final result was very good: I used two screws to fix the SCART cable to the female 23 pins connector. Once closed, the female connector is very solid. 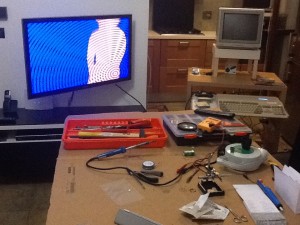 Testing the adapter with State of the art Demo 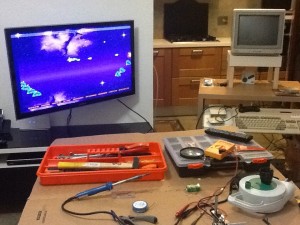 Testing the adapter with Project X

The test showed very sharp images. There’s only a bit of color overlapping on crisp borders. But the major problem occurs with 50Hz scrolling games. The image, in fact, is blurred during screen scrolling. This is probably caused by a conflict between the TV’s 100Hz refresh rate and the lower rate of the Amiga output.

Here’s a video of a test with State of the art demo: