I’m in Sicily, at my parents’ home, for Easter holidays. It’s time to wake up my old Amiga 500, which has been sleeping under a cellophane in the garage for the last fifteen years.

It’s everything where I left it: the Amiga 500, the original two button mouse, the Commodore 1084S RGB monitor, a joystick, the power supplier and all my floppies inside six disk boxes safely stored into a cabinet.

I picked up everything and connected all the cables. Now I’m ready to test the hardware.

I have two ideas about this problem: it could be caused by the floppy drive heads or maybe the disks could be demagnetized. I hope for the former, cause the latter would mean that I lost all my old projects data.

Let’s try cleaning the floppy drive. I opened the case, removed the motherboard shield and extracted the drive. 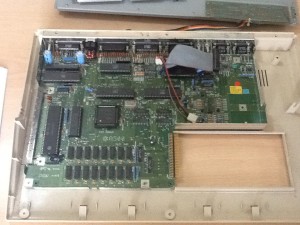 Then I removed the drive from its container and reached the heads. I cleaned them with cotton sticks and alcohol. 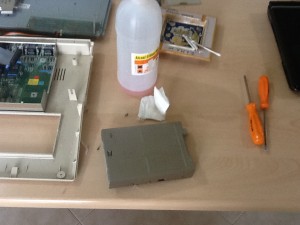 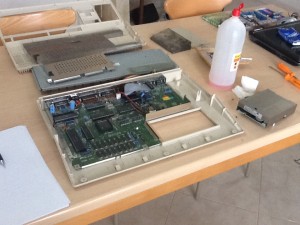 After the cleaning I reassembled everything and tested again the drive. No changes, again the disks are not recognized.

At this point I’m afraid it’s a problem with my old floppies, but I still hope it could be a drive malfunction that my cleanings didn’t fix.

I’ll try to find some way to test the disks and extract my old data. I found on the Internet a floppy disk controller, the Catweasel, which can allow a PC to read a great number of old disk formats using a standard PC floppy drive. It could be a good solution but I would need an IDE bus and a PC floppy drive which I don’t have. Plus, the catweasel is not very cheap and I would use it only once.

A better idea would be buying an external Amiga floppy drive (I found one on ebay for 25€) and use the Amiga itself to extract my data. Problem: I still need a primary drive in order to boot the system and load some data recovery applications (the Amiga can’t boot from the external floppy). Solution: I need to replace my internal floppy drive; a floppy drive emulator would be the perfect solution. After searching on the Internet, I found the HxC Floppy Drive Emulator, an open Amiga compatible drive emulator available both with USB and SD interface. I just ordered a SD version on Lotharek’s website.

And now I only need to wait for the external floppy and the emulator to arrive.

7 thoughts on “Turning on my old Amiga”